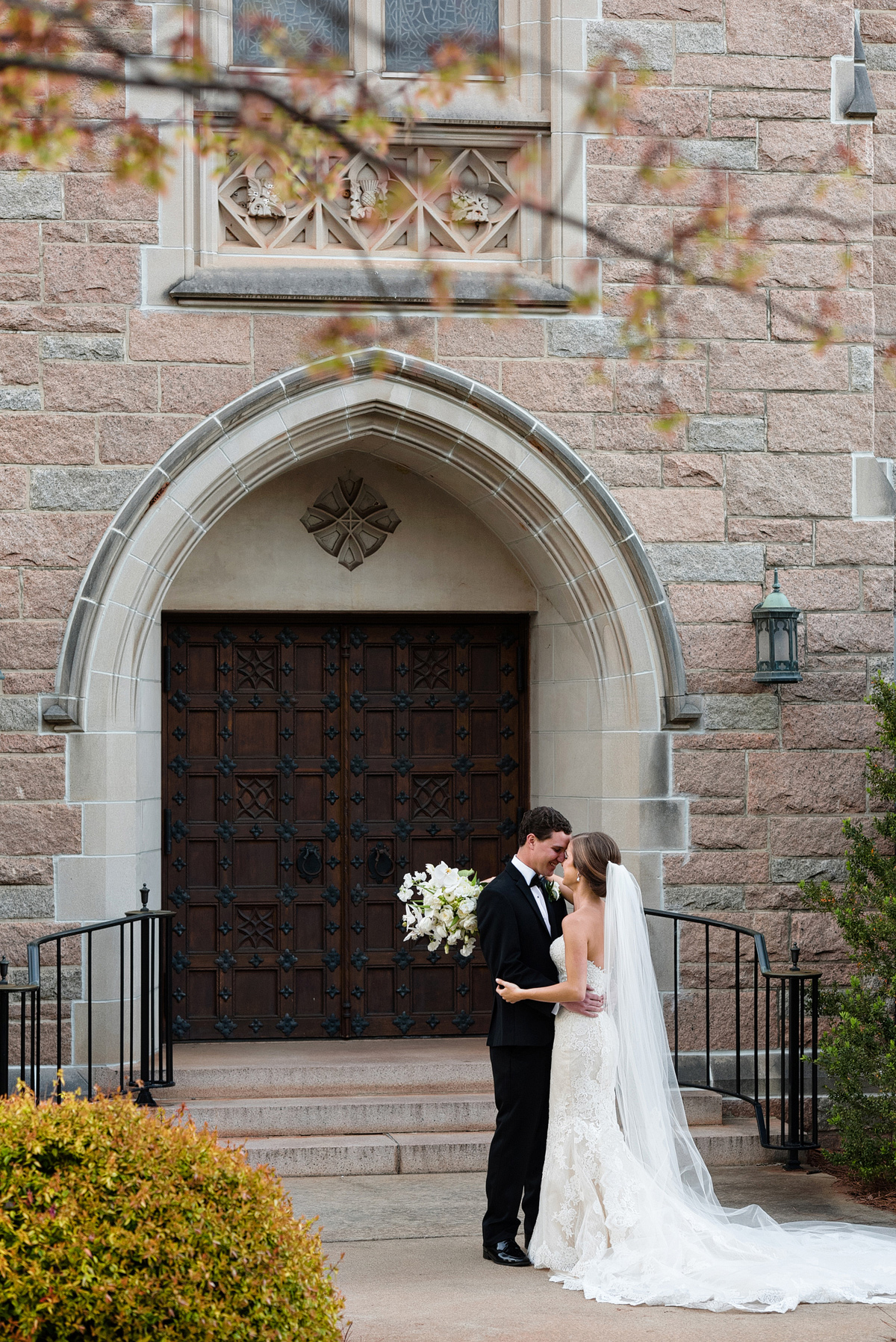 When I was in college, I remember a friend telling me that most of us will know the person we’re going to marry by the time we’re 18.  Well, I think that statistic, if there was ever any truth to it at all, probably hailed from a much earlier time when people were less mobile and tended to marry the people with whom they grew up.  Things are obviously very different in this day and age, with people gallivanting all over the map, so it’s always so sweet to see two people who knew each other as kids coming back together in a new way as adults.

Hillary and John have known one another since middle school.  They both grew up in Charlotte, but attended different schools.  Still, they had some mutual friends, including two of the groomsmen.  Hillary says she doesn’t remember exactly how she and John first met, but she recalls hanging out with John at functions, and even going to some of his church basketball games.  One of her favorite memories of her youth, she says, was that she invited John to her Sweet 16.  She was allowed to invite 5 friends from other schools, and John made the cut.  I gotta say, that’s pretty adorable.

Hillary and John moved from friends to something more during senior year of college; John asked if Hillary wanted to have dinner with him, some of Hillary’s girlfriends, and their boyfriends.  She said yes, not realizing that the whole thing was a set up.  After dinner, the group hit Angry Ales on Montford and had a blast.  A few days later, John invited Hillary and a few other friends to his mountain house for some skiing, and that was where things really started to fall into place.  Hillary quickly discovered that John was kind and sincere and incredibly selfless.  Although she had known John as a good friend for years, she found herself drawn to him in a new way.  For his part, John found himself attracted not only to Hillary’s natural beauty, but also to her confidence in what she wanted from life, and to her willingness to stray from her comfort zone.

John proposed during the July 4th weekend.  The two had planned an impromptu trip to Beaufort, SC, just for the heck of it.  When they arrived on Friday evening, they had no real plans, so they headed out to look for a place to get dinner and drinks.  After striking out—John kept finding little reasons to say no—they headed back to their bed and breakfast to regroup over a glass of wine in the adorable little courtyard.  Hillary turned around for a brief moment to dry off her chair, and when she turned back around, John was on one knee.  They spent the night celebrating, then announced their good news the next morning.  When they got home to Charlotte, they held a big family dinner with both of their families to celebrate.  The ring was based on one Hillary and her best friend (and eventual Maid of Honor) discovered a year earlier when they went out to do a little research.  It’s a three-stone design with an oval and two half-moon diamonds.  It’s pretty gorgeous.

While planning the wedding, Hillary and John knew a main priority was for their out-of-town friends to have a great time in the city in which both of them grew up.  They decided on Covenant Presbyterian Church in Dilworth for the ceremony because it was John’s childhood church.  For the reception, they chose Carmel Country Club because it was such a big part of Hillary’s life as a kid.  Win-win.  I for one, was thrilled with both choices.  Carmel CC offers some beautiful scenery, and Covenant Presbyterian has both a fantastic-looking exterior and one of the loveliest sanctuaries in Charlotte.

Both the bride and the groom got ready at their family homes.  Since John’s family lives only a few blocks from Covenant Presbyterian, the fellas decided to walk to the church, and that stroll yielded some great shots of the guys against the backdrop of downtown Charlotte.

After a lovely ceremony, the party reconvened at Carmel CC, where Right to Party, one of the most popular wedding bands in town, kept things hopping all night.  The whole day was flawless, and I could see how much fun Hillary and John had reveling in the love of friends and family.

Congratulations, you two.  I loved working with you, and I wish you all of the very best.

Event Planner: Sarah Beth Thie of We Tie the Knots

Hair and Make-up: Lindsey Regan Thorne of Be Pretty

Thank you to Nathan and Emily for helping me craft such a beautiful image collection for Hillary & John.