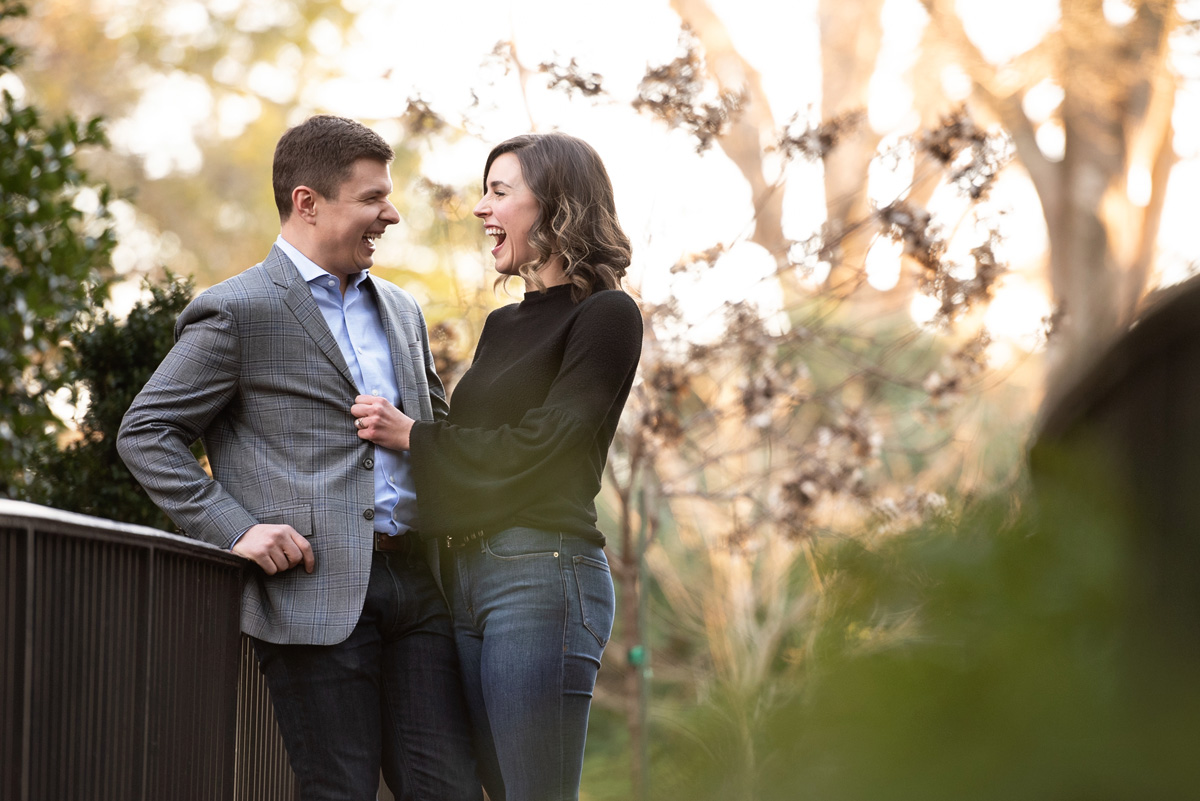 Emily and Brett were living in Nashville when they met in 2014.  They were both out at a downtown restaurant called Jackson’s when their paths crossed, but each thought the other was already involved in a relationship, so things didn’t go anywhere that night.  It wasn’t too long, however, until Brett was calling Emily to set up their first date. This time, things went better. They grabbed dinner at a Nashville restaurant called Sambuca, sat in a corner booth, listened to some great live music, and ended up holding hands.  So sweet.

Casual and low-key when they aren’t at work, these two were a natural match.  Emily found herself attracted to Brett’s blue eyes and to the fact that he genuinely seemed to want to spend as much time with her as she wanted to spend with him.  On his end, Brett loved how Emily could light up a whole room, even if she were only meeting people for the first time.
When Brett made up his mind to propose, he decided to roll the event into another Emily had been requesting for several weeks–Saturday morning pancakes.  The catch? Brett had no idea how to make pancakes. So he did what most of us do in the modern age and surfed over to Youtube for a few tutorials. On the day of the proposal, Brett and Emily took a walk about the neighborhood and a nearby park.  Afterward, Brett told her he was going to make pancakes. When their delicious meal was over, Brett asked Emily if she would grab a new light bulb, saying there was one in the kitchen that needed replacing. And this is where it gets funny because unbeknownst to Emily, Brett had tucked the ring inside the lightbulb cabinet in a place where she was sure to see it when she went looking.

Only she didn’t go looking.  At first, she said she didn’t want to deal with that kind of stuff today; Brett could just handle it another time.  Scrambling now, Brett asked if Emily had seen any floodlights lying around. “No,” she confidently replied. “I know we don’t have any of those.”  Finally, Brett was reduced to saying, “Can you just check to see what kind of bulbs we have in there?” Emily gave in. She yanked open the door, and Brett could just see the ring sitting there.  But Emily only grabbed a lightbulb and handed it to Brett. “See anything else in there?” he asked. So, a little exasperated, Emily pulls open the door again and grabs a DIFFERENT bulb, still not seeing the ring.  At this point, Brett grabbed the ring himself, dropped to one knee, and proposed. The ring was one that he and Emily had discussed, but that Brett tracked down himself.  It’s simple and traditional, with a single round-cut diamond.

For the engagement shoot, we met at Duke Mansion  It was in early January, but the temperature was relatively mild, so shooting outside was quite pleasant.  It’s also a testament to how carefully the gardens around the mansion have been cultivated that even in the middle of winter, there was so much lush foliage to use as backdrops.  For Emily and Brett’s shoot, we started out in the East Garden, wrapped around the back of the mansion through the McGuire Lawn, got some beautiful shots on the steps in the Nisbet Garden, and then finished–with the sun setting–on the Dargen Spring Meadow.

Emily had her hair styled at Blo and did her own makeup, and she looked lovely.  Despite the fact that Emily and Brett had never had professional portraits taken, they were a complete delight to shoot.  There was zero awkwardness, just a sweet and comfortable feeling of affection.

Can’t wait to see these two later today when they make it official.