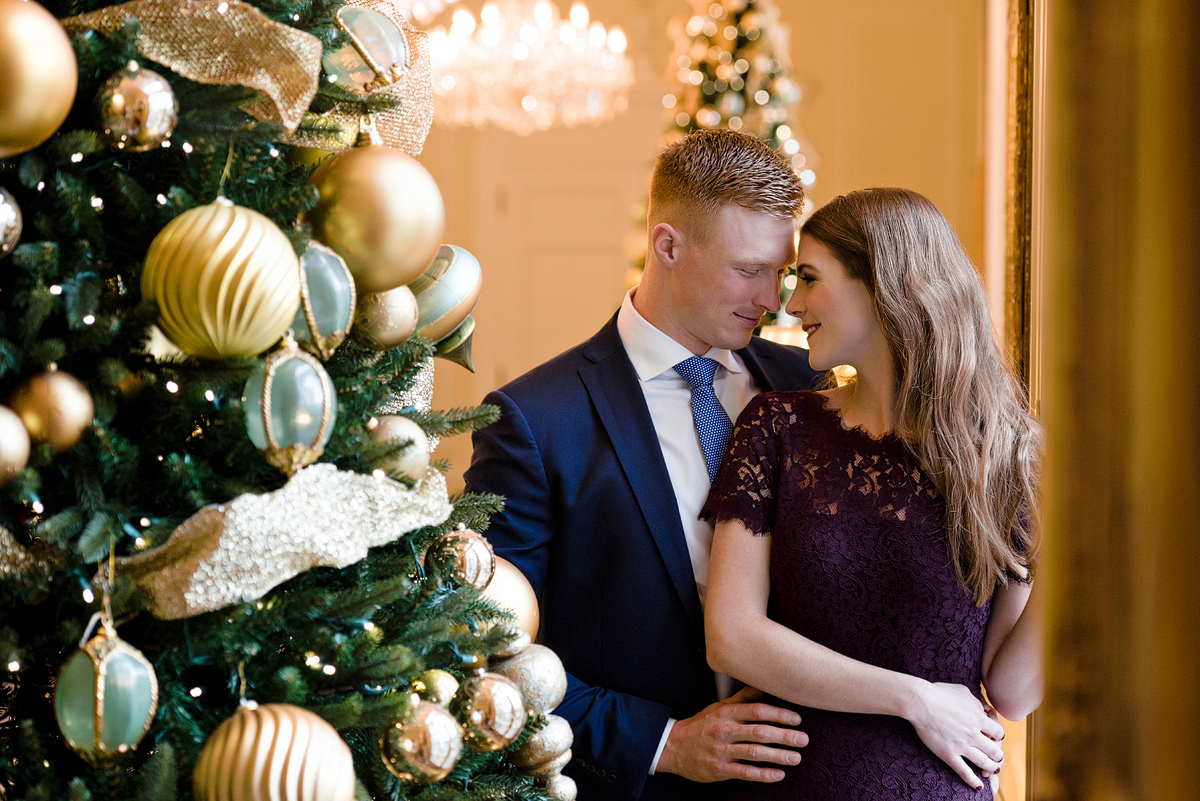 Julia and Patrick first met one another when they were freshmen at Boston College.  They saw each other around campus every once in a while and said hello, but nothing more.  After a brief summer away from school, they returned for sophomore year in 2011 and ran into each other.  They exchanged numbers and started dating a short while later, in December of 2011.  I’m a sucker for high school and college sweetheart stories, especially when those stories belong to a couple as adorable as this one.

And of course their first real date is adorable, too.  Jules drove over to Rye, NY, where Patrick was staying with his family for the holidays.  They ate lunch by the window overlooking all the beautiful Christmas lights, and then—and this is where it gets fantastic—Jules and Patrick joined Patrick’s family at an outdoor rink they’d rented out for skating.  Not just his immediate family, mind you, but 50 members of his extended family who had gathered for a reunion of sorts, many of whom had a long and storied history in skating and hockey.  Jules, who had next to no experience with skating, held her own and had a blast, and needless to say, she got a feeling for the family pretty quickly.

When Patrick proposed, he took Jules back to the same restaurant in Rye where they’d had their first date.  He’d arranged to have the whole production filmed, and ten minutes after he popped the question, both of their families joined them for brunch and mimosas.  The ring was a three stone concoction Patrick designed himself (after judiciously consulting Jules’ Pinterest page).

Jules (that’s what most people call her) moved on from BC to grad school, where she’s in training to become a physician’s assistant.  When she’s done with school, her hope is to work in the ICU or in emergency medicine.  Patrick, on the other (but equally awesome) hand, is a hockey player.  He played at BC and signed his first professional contract out of college, with the Carolina Hurricanes.  Currently, he’s in his fourth season with the Hurricanes, and his second as team Captain.  I find these two so interesting, as I always do with couples who pursue what I see as exotic and kinda/sorta conflicting professions.  Patrick plays a fast-paced and sometimes violent sport, and Jules patches people up.  Gotta love that kind of yin and yang in a couple.

When Jules first got in touch with me to photograph their engagement session, it turned out that I was already booked for the date she and Patrick had hoped for, so I referred her out.  When she got back in touch a few weeks later to let me know that their timetable had shifted, I was thrilled to have an opening.  We decided to have our session at the Duke Mansion during the holiday season, and if you’ve been to the Duke Mansion during that time of year, you know how beautiful it is.  Add two attractive people and mix.  It was a fantastically easy shoot.  My favorite moment was toward the end of our time together, when we made our way back to the Peter Rabbit Garden.  There’s a little picnic table back there, and I asked Jules and Patrick to sit together for some portraits.  Since I’m a southerner and know little about the finer points of northern life, I asked Jules if she would regale me with the rules of hockey.  For the next ten minutes or so, she did her best to fill me in, Patrick chuckling every time she got something wrong.  It was sweet and funny, and I adore the images.

Jules and Patrick will be married on July 7th in Palm Beach, Florida, and I wish for them all of the very best things.  This shoot was a pleasure, and they are an inspiring couple.

Hair and Make up: Patrick at Shine Salon